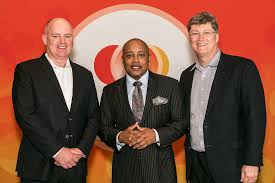 In 2015, Daymond John joined the panel of judges for the NACUSO Next Big Idea Contest. It was a tough competition but in the end, the audience voted and awarded the trophy to Daon’s IdentityX. Here’s where they are now:

Describe briefly your Next Big Idea?

Daon’s IdentityX platform enables members to establish their digital identities with ease—maintaining the highest levels of security without compromising the intimate credit union experience. Instead of having to rely on passwords and PINs, members can authenticate in under two seconds, using a selfie, fingerprint, or by speaking a short phrase. IdentityX combines something you have (your mobile device) and something you are (your biometrics) to deliver an authentication experience that’s convenient, fast, and secure.

What memories do you have of that day/event? What things stood out for you?

The relevancy of IdentityX to the credit union industry became apparent at that time. We had several subsequent conversations with credit unions that all centered on the same challenge: finding a better way to do business while making their systems and platforms more secure.

Did you think you were going to win after seeing all the pitches?

We didn’t know what to expect, but we were incredibly honored to be chosen. At the time, IdentityX was still in the early stages of adoption and awareness, so this was a gratifying validation of our efforts.

After winning were you able to make meaningful connections at the conference?

We made several meaningful connections with credit unions seeking adoption of our product as a result of the conference. Many of the credit unions were interested right away but needed the support of core processors and third-party service providers to be able to consume our software.

What have been your biggest successes been since winning?

Since winning the Next Big Idea Award in 2015, Daon has seen great success in the financial services industry, and we are now working with many the world’s most iconic and innovative financial brands such as Visa, Mastercard, Experian and USAA, along with over 100+ credit unions live on our platform. We’ve expanded the IdentityX platform to include new biometrics and capabilities, such as account creation and recovery. We’ve also made it possible for businesses to interact with users across any channel—delivering a consistent experience through mobile, desktop, contact centers, and even digital assistants.

Where do you see your Next Big Idea in the next 5 years?

We see IdentityX becoming a universal platform for trust. The financial services industry has now seen the many benefits of biometric authentication (member satisfaction chief among them), but there are many other industries that have yet to benefit from our trusted digital experiences.

To apply for the 2019 Next Big Idea Competition, click here.

Next Big Idea Competition is sponsored by Mastercard