Each month we highlight at least one NACUSO member by interviewing one of their top executives. It’s an opportunity to tell their story in a casual and fun way. This month we sat down with Anthony Montgomery, CEO of CUProdigy. They have been a member of NACUSO for many years and this year made a commitment to be a Platinum level sponsor. 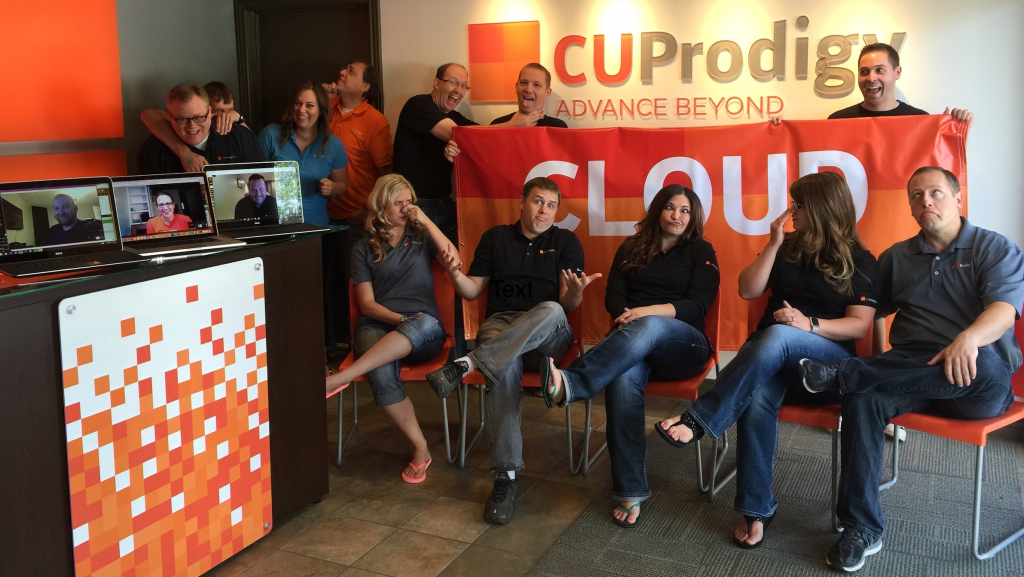 PART ONE: Life Story and Experiences

What’s your current position and can you give me a brief overview of what it is you do in your work?

I’m the CEO of CUProdigy and provide vision, leadership, and purpose.  We are a Core and Cloud CUSO.

What would you say most motivates you to do what you do? What are you most excited or passionate about?

For readers familiar with Don Clifton’s StrengthFinders, I’m wired for turning something good into something great.  I’m a maximizer.  I’m also a leadership enthusiast.  Two of my other leadership strengths are centered in relationship building.  Thus, making things better and leading people are how I can be summarized.  I love leading, helping, and supporting people to be better.  It just so happens that I get to do it in the field of technology within the credit union industry.  Everyday, I come to work excited for CUProdigy to be better than the day before.  Funny, but for some reason the staff calls me impatient.  Hmm…I prefer the term urgency aficionado.

I want to hear the story of how you came to work with credit unions. What attracted you to work for CUProdigy?

I joined CUProdigy in September 2015 and the lure was the convergence of leadership, credit unions, and technology.  Service and cooperation have always been part of who I am.  I think my service disposition naturally led me to technology.  My first technology job was on a help desk in graduate school in the early 1990s. 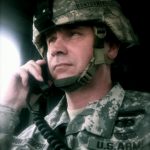 Sadly, finding credit unions took me a bit longer as I am a reformed banker.  After my initial stint in the Army and grad school, I worked for an investment bank in financial trading software for a number of years.  It was highly specialized technology and I traveled extensively to trading centers around the world.  I learned a lot and it was a challenge.  However, the culture was more about profit and less about people.

So in 2003, I decided to make the jump from investment banks to credit unions for the opportunity to broaden my technology responsibility from software to a more holistic charge.  I was pleasantly surprised at how different credit unions were with regards to people.  From that leap, I clearly knew that credit unions were in my DNA.  It’s cliché, but I literally went from Wall Street to Main Street.

Now if we can go even further back, where did you grow up and what was it like living there? Where did you go to school?

I was born in California and grew up all over.  I even lived outside of London and attended English schools in third, fourth, and fifth grades.  I also lived over a year in Italy.  I think living overseas has helped me become more diverse and aware.  It was also cool to have an English accent in sixth grade.

I graduated from Southern Illinois University at Carbondale with a Bachelor of Science in Finance and a Master of Business Administration.  I’m currently an all-but-dissertation (ABD) student at Creighton University in the Doctor of Education in Leadership program.  I hope to get my research done soon so that I can defend.

Who were your mentors along the way? People who deeply influenced who you are, what you believe in and what you’re committed to in your work and life? Tell me about them.

Brandi Stankovic is a mentor of mine and she is the one that contacted me about CUProdigy.  We worked together at a previous credit union, and I consider her a fantastic mentor within the credit union industry.  I have a lot of respect for her and have always been extremely impressed by her leadership.  Also, I had a lot of great mentors in the military during a 20-year career spanning both the Army and Army National Guard.  The Army taught me a lot about can-do attitude, hard work, perseverance, and values.  I am also very grateful of CUProdigy’s Board with CFOs like Jack Creager and Jeff Shaw, and CEOs like Dan Kester, Rainy Thoen, Carla Hedrick, Rob Taylor, and John Faries.  Their guidance and mentorship has been very prized.  It’s enormously valuable for a CEO to learn directly from constituents.  As a CUSO, they are my boss and customer.  Some of these executives have been with CUProdigy for decades and they are wonderful resources.

Finally, can you share something interesting about you that would surprise our readers? It can be anything, a hobby, an adventure, sports, the most embarrassing thing that’s ever happened to you, 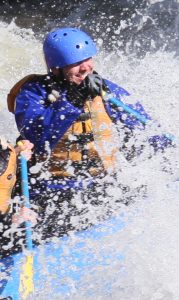 It’s tough to pick one.  I once crash-landed into a house under a parachute canopy, was once run over by a tank, and I also nearly drowned on a class V rapid.  The house was in Vicenza, Italy when I jumped out of a helicopter.  The wind blew me off the drop zone and onto an older, two-story house.  I hit the roof, rolled off, and landed in some grape vines – never actually touching the ground.  Awkwardly, my crash landing did not go unnoticed.  The lady of the house came out yelling in Italian.  All I could do was smile, say “Mi dispiace”, and roll up my parachute.  The Army later received a bill for the damage that I had caused.

Tell me the story of how your CUSO was created – the early days. Tell me about some of the memorable characters in the history, some that brought your story color, drama, comedy, conflict?

Our business philosophy can be distilled down to voice and choice.  CUProdigy was born out of great desperation and uncertainty.  In 1991, Information Now Incorporate (INI) filed for bankruptcy, which was the core software that the original CUProdigy credit unions were using.  Instead of surrendering to a new core conversion, these credit unions banded together to buy the software and start their own CUSO.  This spirit of collaboration and having a voice in one’s own technical destiny is still a concept that resonates at CUProdigy.  From the beginning, we have practiced teamwork and collective independence.

Later, in 2009, CUProdigy made the decision to rewrite its legacy software and transform the core into completely new, modern software architecture.  This was a very savvy decision and virtually unheard of back then.  Our core is a true browser based, OS independent, cloud centered platform with easy access to data and simple integration with third parties.  Supporting credit union choice is a big deal for us.  A credit union can choose any third party they want to help them meet their strategic objectives.  After all, why should we decide what’s best for them?  This modern, open and flexible software is one of the key reasons why I joined CUProdigy.  Selfishly, I didn’t want to be burdened with decades old obsolete technology.  Legacy technology would have been a deal breaker for me.

Then, in late 2015, we simplified our core pricing to align with our technology and the culture we are building.  We moved to an all inclusive software-as-a-service model of $1 per member per month that includes all our software modules, existing interfaces to our core, private cloud hosting, data encryption, backups, disaster recovery, next generation firewall protection, support, support programming and enhancements.  We felt this created the most value for our credit union community versus a traditional purchase approach.  We abhor the nickel and dime approach.  Making everything we do a fee impedes service and creates a barrier with our credit unions.  It also significantly reduces upfront charges for credit unions to move to a core since there are no large software purchases.

Next, in 2016, we added cloud managed services like infrastructure-as-a-service, disaster-recovery-as-a-service, and backup-as-a-service.  These were natural extensions of CUProdigy’s cloud investment.  Our private cloud allows us to have complementary product lines and a dual product strategy.  In simple terms, a credit union can leverage our private cloud without being a core client.  Our spirit of collective independence also shines through with these new cloud offerings.  CUProdigy has invested heavily into modern cloud infrastructure that typically only the billion dollar credit unions can afford.  We run the same technology as the big boys, but provide it to credit unions of all sizes.  In short, we level the playing field.  We represent a cooperative model for a credit union to own a private cloud.

Most importantly, our history and technology caters to a specific CEO persona that defines our CUSO.  We are not for everyone.  The ideal CUProdigy CEO is a progressive thinker who, while not necessarily young in age, is young in spirit.  This is a tech-savvy individual who understands the cloud and knows that staying ahead of the technology curve is a strategic advantage.  This CEO is a creative risk-taker who doesn’t mind shaking things up a little if it makes sense for the long-term health of the credit union.  We want a CEO who is willing to listen to our expert advice, but still wants to make his or her own choices.  Because we’re a CUSO, we’re also looking for CEOs who are eager to take an ownership interest in what we do – to be true collaborators as we continue to develop the technology solutions that credit unions really need to remain strong, competitive, and relevant.

If you could start your CUSO all over again, would you do anything differently? Why and what would you do?

However, I will say that the decision to rewrite the core in 2009 was absolute genius. CUProdigy was one of the first, if not the first, to have a modern core in the cloud.  And we have only gotten better with time.  Overall, I think it is too early to reflect and know fully what I would do differently.  Let’s check back in after a few years.

Finally, when you think of the future, what gives you hope and what makes you concerned?

Interestingly, CUProdigy is a 25-year old start-up.  We’ve reinvented who we are yet we remain under the radar of many credit unions.  When we go to trade shows, credit unions and vendors alike don’t know we exist.  We hear all the time that we are the best kept secret around.

Yet, we are not just about technology.  People are important too.  Even technology companies are people companies.  Culture is part of our strategy.  We are going through a cultural transformation designed to match our culture to our technology.  We are applying agile philosophies, the Scrum framework (note: see May 2016 issue on HBR regarding agile becoming mainstream), and practicing servant leadership.  We used to act like a traditional “no” vendor.  Everything was no.  No more.  We wear t-shirts that say #SQMG (Status Quo Must Go).  We now call our employees Prodigies and pride ourselves that we are two-dozen Prodigies helping hundreds of thousands of members.  This identity helps us craft a sense of purpose.  We also reward Prodigies around 12 hash tag themes with names like #collaboration-champ, #helpful-hotshot, #knowledge-rockstar, #transparency-top-dog, and #wow-factor-wizard using Bonus.ly.  We’ve even turned the organizational chart upside down.  As the CEO, I’m at the bottom because servant leadership flows up.  If I can’t live service to the Prodigies, how can I expect them to serve credit unions?